My Valentine by Trochilidae

which coincides with the opening of this 4th annual awards show with the purpose of promoting love & encouragement...

" My Valentine" is a song co-written and performed by American recording artist Jim Brickman, with a guest vocal from Martina McBride. It first appeared on his 1997 album Picture This, and later on McBride's album Evolution.

The song charted on the Billboard Hot 100 and Adult Contemporary charts in 1997, peaking at number 50 on the former and number 3 on the latter. Although it first appeared on the Hot Country Songs charts at that time, it was not officially released as a single to the country format until a year later. The song was the follow-up to her single "A Broken Wing," to which "Valentine" originally served as the b-side. Upon its official release, "Valentine" peaked at number 9.

Valentine's Day isn't everyone's cup of tea - but as with anything in life - it is what you make it! That is why we are giving you a choice! You can choose whether you celebrate Valentine's Day Solo or with Someone Else! Or both, because you're allowed up to two songs!

You can sing either a duet or a solo song OR if you're feeling really outgoing - you can sing both!

Your Valentine Challenge!
Please ensure you complete both Part A and Part B of the challenge.

Valentine Challenge - Part A: You may sing any song from the website on Wednesday February 14, 2018! If you already know what song you would like to sing, you can request it here.

Valentine Challenge - Part B: If you're on cam, we want you to dress the part and turn yourself into a walking valentine. Sport the red, white and pink, decorate your cam and get into the loving spirit! If you're doing an Audio-Only challenge, just write us a little love poem in your song comment section. Your poem must be four lines long and contain the following words; Love, Heart, Music and Happy!

To love & be loved,
This heart is in love
Music in this heart
Feel happy not hurt!

Thanks For Joining Us !!! Tina & Jodi

A very pretty singing Valentine here. You did a great job...Milo

Well done my friend. Excellent song selection, wonderful rendition,
All the stars for you ********* Thanks for sharing this with us,
It was a pleasure to listen, enjoyed being in your studio,
Have A Happy Valentines Day!
Nancy & Maurice

You diid a good job on this song. Enjoyed my listen.

This is awesome Trochi
Your studio is pumping with sweetness today

I have enjoyed your Valentines entry..

This is so lovely, Trochilidae! 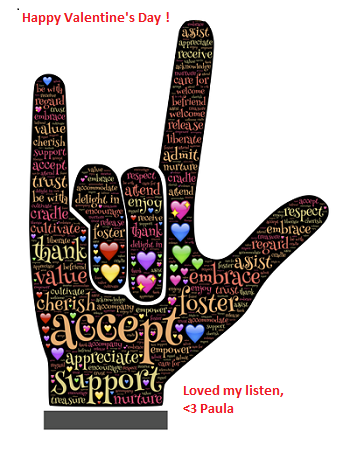 How goes it? Are you finding your way around 2.0? Would like an animated avatar? Send me a PM