PART TWO Ahhouy You Landlubbers...Sup? I choose this image because in the Captain's Suite of the Ship That Rescued Me, With her legs wrapped around a bottle of rum was the same doll! It sorta reminds me of a love lost to the sea! 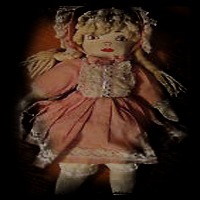 Ole Fishbreath Foster here, dropping in as this saga continues. As I was a last saying, I dropped the last of the cooks chops when a vessel in sight I did see. Twas not just a vessel, it had an enlarged mass for speed in the wind, forty five oar ports on each side, flanked bow & stern with double rows of cannons, 7 in the front and rear on each side. Ahh she was a war ship for sure. Since I was lost somewhere in the British Virgin Isles, I pulled out my telescope to get a peek at her flag, fearing she might be some type of British Naval Ship.

As I fixed in on her mast and found the flag, I was both relieved and puzzled. There she flew the "skull and crossbones" aye! But twas a large patch on a pair of "hot pink" winches drawers just a flapping in the wind. I watched as they dropped anchor, lowered their Captains dingy into the water and headed toward the shore.
I almost fell backwards as I focused on the landing party, there were Nine of them,
Aye but one, the one given the orders, OMG she was the most beautiful of Nubian Women, I could not help but look back up the mass after viewing her amazing rear.

I wished my breath was better as I thought to myself what I would reveal about the ordeal as I stepped out to the shore to greet them. Seeing my poorly shape, she order that I not be harmed but chained and brought to her. After her personal interview and questioning I was rescued and became her ships physician. For a while we were pirates by day and the most discreet of lovers many a night. Ahh the sweetness of the love this bitter yet passionate woman carried. I must have been the most educated, closet thing to a Dandy she had ever picked up with at all.

We sailed and grew quite dangerously fond of one another. Ohh but so heart broken had she been even from her childhood, much like me. I pointed out to her that I could see plainly, her first love would always be the sea, while I had a different calling, If I stayed and our love was discovered she'd have to kill me or loose her crew, to which she had no haste in answering, "when the time comes that's what I will do." not meaning loose her crew! OK? Well after that me mind was settled, so when we docked in Barbados I jumped ship and made my way here to St. Croix. Twas the last I've seen of Captain Faith Fancy Pants!

Only be around happy stress free people, its very short stay from cradle to doom,dont waste a minute

oooooh this is wonderful Doc!! Classic! your voice delivers it perfectly!!! And I love the continuing story!

glitter-graphics.com That my friend was a fantastic job you did on this.I give you all the stars*****.It sure was great listening to you..Thanks for sharing this with us...

So happy to be back after a long rest..thank you so much bee for giving me the gold again..

heloo Maurice another great story and indeed a great performance as always...:-)
great dropping you stars from across the sea for you my friend******************* good luck!!

HERE IS MY ENTRY: http://www.singsnap.com/karaoke/r/caa667cfc

If U are in the U.S. check out my Avon online page www.youravon.com/tehnes

Howdy Doc!! thanks for stopping by n U'r thoughts n kind words on Dear Me!

An all star hit!! I LOVE the story..I can't believe I get to see you perform and don't have to pay! LOL You are the total package...great vocals,presentation,video and showmanship!! DOC, You just know how to Brang It!! AWESOME!!!

YOU HAVE THE STAGE YOU CAN REALLY PUT ON A SHOW

Wow!!! love this!!! how positive and wonderful...love the fact that u smile when u sing!! amazing!! i have a request... One of a Kind Love Affair.....cant remember who sings it but...ur voice is similar...or Show and Tell...

Stay safe and healthy all <3

Thanks for sharing!! Good Luck!!

Great Story Doc...Excellent Sing, Video and Performance my Friend!! You are a True Performer and I so enjoyed your story and Sing!! LOVED THIS MY FRIEND!! Thanx for the Fine Entertainment from U 2nite!! Huggzzz,, Bev

Hello Maurice this was a fabulous sing of this song love your story too,you have such a good voice I loved this one hugsssssssss

I really loved this DrWoodard....You are sounding real good this evening and on top of your game.... I really enjoyed my visit me matey.... Hugs *-* iLOVEit

Your voice is fantastic! You have a great demeanor as well. You, my friend, are very likable! Good luck to ya Matey!