...is a song written, composed, and originally recorded by Canadian singer-songwriter Joni Mitchell in 1970, and originally released on her album Ladies of the Canyon. It was a hit in her native Canada (No. 14) as well as Australia (No. 6) and the UK (No. 11). It only reached No. 67 in the US in 1970, but was later a bigger hit there for her in a live version released in 1974, which peaked at No. 24. Charting versions have also been recorded by The Neighborhood (who had the original top US 40 hit with the track in 1970, peaking at No. 29), Maire Brennan, Amy Grant and Counting Crows.

Mitchell said this about writing the song to journalist Alan McDougall in the early 1970s:

I wrote 'Big Yellow Taxi' on my first trip to Hawaii.
I took a taxi to the hotel and when I woke up the next morning,
I threw back the curtains and saw these beautiful green mountains in the distance.
Then, I looked down and there was a parking lot as far as the eye could see,
and it broke my heart... this blight on paradise.
That's when I sat down and wrote the song.

The song is known for its environmental concern – "They paved paradise to put up a parking lot" and "Hey farmer, farmer, put away that DDT now" – and sentimental sound. The line "They took all the trees, and put 'em in a tree museum / And charged the people a dollar and a half just to see 'em" refers to Foster Botanical Garden in downtown Honolulu, which is a living museum of tropical plants, some rare and endangered.

In the song's final verse, the political gives way to the personal. Mitchell recounts the departure of her "old man" in the eponymous "big yellow taxi," which may refer to the old Metro Toronto Police patrol cars, which until 1986 were painted yellow. In many covers the departed one may be interpreted as variously a boyfriend, a husband or a father. The literal interpretation is that he is walking out on the singer by taking a taxi; otherwise it is assumed he is being taken away by the authorities.

Mitchell's original recording was first released as a single and then, as stated above, included on her 1970 album Ladies of the Canyon. A later live version was released in 1974 (1975 in France and Spain) and reached No. 24 on the U.S. charts. Mitchell's playful closing vocals have made the song one of the most identifiable in her repertoire, still receiving significant airplay in Canada. In 2005, it was voted No. 9 on CBC's list of the top 50 essential Canadian tracks.

In 2007, Joni Mitchell released the album Shine, which includes a newly recorded, rearranged version of the song. 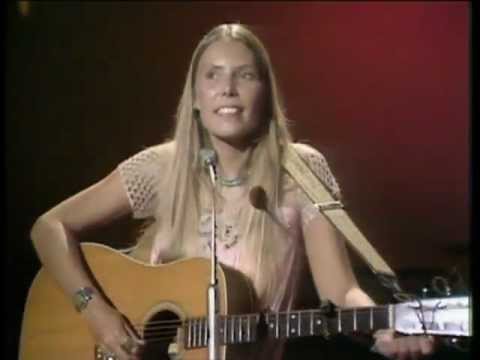 There’s no more appropriate song for Earth Day than one with the refrain of “They paved paradise / And put up a parking lot.” Joni Mitchell has said most of the song was inspired by a trip to Hawaii, and that famous line was the result of her hotel room view – lush mountains in the background and pavement stretching far beneath it. The idea of replacing the landscape with a giant parking lot is particularly offensive to some, considering that we think of parking lots as ugly, dirty wastelands that seem to be empty more often than they’re in use. In one of her most famous songs, Mitchell also commented on human nature – “Don’t it always seem to go / That you don’t know what you’ve got ’til it’s gone” – and the fact that people were just starting to become aware of their impact as the things they enjoyed began to disappear.

I CAN TELL BY READING MY NOTIFICATIONS WHO CLICKS MY LOVE IT HEART AND WHO DON'T!

beautifully sang sweet this was such a lovely performance xxxxx

Good Morning friend...this is a great song and a lovely sing***** Hugs Noah

Love this song, love what you wrote up above. I figured the "story" was something like this. It is a "sad but true" song. I've always loved the lyrics...and it's just a beautiful song all around!

You did a very pretty sing here too. Really enjoyed my listen. Great job!

Beautiful song I'm having the pleasure of listening to this morning. Great job on this song and a new one for me. Thank you for sharing this song and your awesome talent. God Bless

Sure love your sweet voice
and soft touch on this great
song and lyrics ,,thanks for
sharing your write-up,
s***********LIb
Shirley

Choose whatever song you like .. and have fun singing it ! Smile life is beautiful :)

Such a beautiful song with great lyrics ....
Another wonderful singing from you .......
Very much loved listening to you !
Excellent !

Just biding my time, singing a song and trying to live life to it fullest! Warm hugs from Oregon!

Haven't heard this one for a long time! You did it well! Loved hearing it again! And, they are still doing it just as bad in these times!

I must have played the Ladies of the Canyon album half to death. Such a great song. Very well done. Best of luck in the contest.

Hey Rida! I never really paid attention to the lyrics in this song. thanks for your information on the song!! Brings new meaning for me. Fantastic sing mf!! Loved my listen!

Happy Easter to all my Singsnap Friends!

Beautiful song, haven't heard it for a long time.. Marvelous rendition, loverd hearing it from you!

Wonderful job Rida! Loved the giggle at the end - just like Joni.

this is wonderful mf, loving this