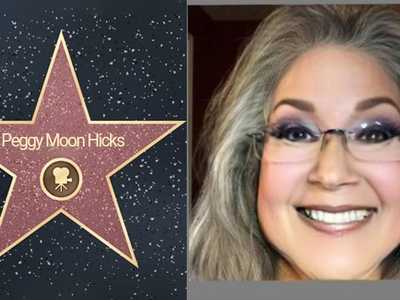 PeggyMoonHicks' real name is Peggy Hicks. Peggy is located in Tennessee / USA and has been a SingSnap member since October 8, 2015. She has a total of 3,267 public recordings that have been viewed 104,502 times and 1,064 achievement points.

I'm retired & live in central west Tennessee in the USA with my husband of 46 yrs. 31 of those years were spent in southern California, 10-1/2 years on Whidbey Island in northwest Washington state, & since July of 2014, we've been living in Tennessee. I've had varied & interesting careers in mortgage banking, law, medicine, & artist management. We have two children & 3 grandchildren. As devout Christians, everything we do is to glorify God.

My musical tastes run the gamut from easy listening to opera, but good singing is good singing, regardless of the genre. I love Gary Puckett's music, & his voice in particular, & it's been my privilege to have known him for the past 15 yrs. He's a terrific entertainer who puts on a fantastic show! It was also a privilege to work with his management on his behalf 15 yrs. ago. I also love The Texas Tenors, who finished in 4th place on America's Got Talent in 2009. They sing country, gospel, Broadway show tunes, & opera, & they've performed over 1,500 concerts. Chicago, the rock & roll band with horns, is another favorite, as are Neil Diamond, Barry Manilow, Frank Sinatra, & Il Divo. Eydie Gorme is my most favorite female vocalist, along with Whitney Houston, Mariah Carey & Vanessa Williams.

I love to sing, & consider my voice to be a gift from God. I began performing at a very young age by singing for friends of my parents, putting on shows with my friends for our neighborhood, & in elementary school plays. Unfortunately, I never learned to read music & thus could not be in the chorale in high school. However, I sang in choir at a church I belonged to years ago, & have had about 2-1/2 yrs. of voice lessons. A friend of mine from high school directed me to this website, & I am grateful to him for the opportunity it gives me to work on my vocals whenever I want to, without the bar scene, which I don't do. My goals here are to improve the quality of my vocals & to try to help my listeners make an emotional connection to the songs I sing. Having been brought up in a family where expressing "negative" emotions (e.g., sadness, anger, crying) was openly discouraged, music has helped me to express them in a constructive way, & I highly recommend it to anyone. It's a lot cheaper than therapy!! I love performing, & love being able to do so on this cyber stage! I've met some really terrific vocalists here, & look forward to meeting even more. Sing your hearts out, & don't be afraid to put yourselves out there!!!