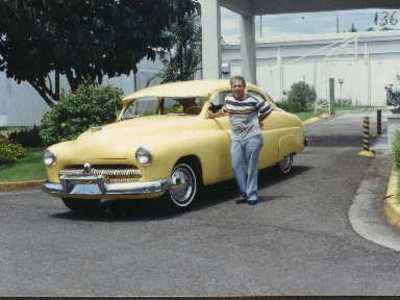 MISTER-MUSIC-MAN is 80 years old and has been a SingSnap member since February 26, 2017. MISTER-MUSIC-MAN has a total of 1,426 public recordings that have been viewed 42,730 times and 363 achievement points.

I grew up in a small town in Pennsylvania. It was the type of town where everyone knew their neighbor, and their neighbor's relatives. Cars and homes were left unlocked and people seemed to have time to help each other. Anyway, it was a nice place to grow up.

In 1946, my parents moved from South to North Main Street, near the business area of town. My mother had just became a beautician and it would be better for my parents to rent a house that had a front room that could be converted into a beauty shop. The house was one side of a brick double. We paid $40.00 rent, per month.

I would be six in August and would begin first grade in September. I had all summer to find playmates, make friends, and just play. I didn't have to take a nap anymore, but had to go straight to bed after listening to the Lone Ranger and Tonto on radio. Before saying my prayers and going to sleep, there was always a story. When it was my Dad's turn, I would always ask for stories about when he as a Boy Scout. The story would end with my dad singing taps, between his hands to make it sound like a bugle. Then I was a happy little boy ready to fall asleep and dream of becoming a boy scout, just like Daddy used to be.

The other side of the house was rented by a family who had a son, David, who was my age. I was happy because at our first house I had two playmates. They were girls. I wasn't allowed to play with Willie and Chickie (Charles) because they were too rough. Now His brother Doug, who was four, and sister Pam, three, were the Indians. The Indians always lost and so did I in a final shootout with Roy. Roy always won because, as you know, he was "King of the Cowboys."

I soon tired of losing on a daily basis. One day I ventured into the next block. There were six to eight boys building some kind of structure next to the alley. They were school aged kids, from six to 11 years old. I said I had just moved there and asked if I could be their friend. So for helping them that afternoon, as best I could, and a nickel dues, I could be a member of their club. That structure became our club house and I was a member of the "Dead End Kids." It was something like a real Spanky and our gang atmosphere. Dues were a nickel a week

One weekend that Summer, my Dad came and gathered up the club members and took us on our first hike, which lead us to a nearby creek. Other hikes would follow and soon included learning names of trees, what wood to use to start a camp fire in the woods, and how to keep it going low and steady, like the Indians used to do. We'd bring hot dogs along to cook and use a special young tree shoot so the hot dog would cook but the tree shoot would not catch on fire. Eventually, we went on an over night trip to the old Scout cabin, which was built when my dad was a Scout. I was so happy to be my Dad's boy. I though he was the smartest, strongest, and bravest man in the world. I wasn't alone. All us kids had good parents. Some just made more time available than others.

Time passed and I was 11 years old. I could become a tenderfoot Boy Scout. Now, I could experience all the things at camp that my Dad told me in those bedtime stories. I had already been encouraged to try to "Do a good turn daily," just like the Scout slogan says, and the meaning of "be prepared," the Scout motto. This would be a new adventure. My uncle had just given up being Scout Master (I didn't know that for many years later.) to Mr. William Schultz, who must have been in his early 30's. He was a good leader, who led a small troop of about 20 Scouts, as my Dad had led us kids a few years before. Over the next six years, beside my Dad, Mr. Schultz would become the greatest influence in my life.

More time passed and I was a Second Class Scout and was preparing to become a First Class Scout, when at camp I was nominated for the "Order of the Arrow," and honor society within Scouting. This was commonly known as "The Order" or "WWW," which stands for three secret words known only by members of "The Order." To join, one must be at least a First Class Scout. I lacked one thing - learning and passing the Morse Code requirement. So I studied and passed those dots and dashes, both in sound and light. Now I was ready to go through my ordeal, a camp outing beginning at night and continuing throughout the next day, testing survival techniques and other Scouting skills. I passed all the test (many do not) and became and "ordeal" member, the lowest of three grades in "The Order." I had learned the secret of the three W's, plus other subjects within "The Order." For those of us who left scouting, we never forget our oath to not reveal what occurred in the ceremonies of "The Order." That was my first introduction to the world of security.

Within the next few years, I became a "Brotherhood," the next higher grade in "The Order." Still a Scout at 17, I was ready to graduate high school and had already been accepted in the Air Force. Those of us who are veterans took an aptitude test upon entry into the service. Wouldn't you know it, my highest score was in radio, which was derived from a test where one had to identify the I, N, and T in Morse code, at a very slow speed. I had turned 18 a few days after basic training and was sent to Keesler AFB, Mississippi, to learn Ground Radio Operations. I received my first security clearance at that time.

I was assigned as a Morse Code (CW) operator at the 1240 AACS at Athens AFB, Greece. The motto of AACS was "Dedicated Service." I liked that. It had a good ring to it. After 10 months I was transferred to Izmir, Turkey. I spent my last tour in Hawaii, was discharged just before Christmas.

I returned to Pennsylvania, working with a local masonry contractor and shooting pool on rainy days. I was 22. One night, after work, I was drinking a beer with a high school buddy, who had been in the Navy. He said, "Lets join the Department of State." I said, "Are your crazy? I don't want a job repairing roads for the state." He said, "No dummy, the Federal Department of State. We can work in the Foreign Service." He, having done his homework, explained that I could do the same type of work as I did in the Air Force. We both went to the employment agency to be tested. I don't know how I passed the typing text. My hands were hard and cracked from cement and lime and typing had been the farthest thing from my mind for the past year. My friend failed the test.

Four months later, and now 23, I had been given a higher security clearance to suit the type of work I'd be doing, and was assigned to the Belgium Congo and soon sitting at a work station in the capital of the Kivu province called Bukavu sending Morse Code.

Another 26 years overseas and 13 Foreign Service posts later, having been married to a wonderful wife, and raising two daughters, I woke up ready to go to work at the embassy in Mexico City. That morning, out of a clear blue sky, after our administrative meeting, I announced that I was going to submit in my paperwork to retire.

As much as I liked my job, and those who I worked for, and those who reported to me, there was no turning back. I had done a "good turn daily." I had been "prepared." I had performed with "dedicated service." That morning, I realized that almost 45 years had passed since my friends and I had been on those first hikes with my Dad; and now it was my turn to help my Dad, my mentor, and the smartest, strongest, and bravest man I've ever known.

That story should have given you insight to my character. My love for music came from both my parents. My dad played the trombone from the mid-1930's to the late 1940's. My mother was a singer in one of those big bands. In 1938 they married and I was born in 1940. My dad taught me to play the baritone and trombone, and in later years, after retiring, I acquired a cornet. A few years later I would be writing the music of the old standards, so familiar to my dad, and play them for him until his passing a few months later. Knowing that my path in life would have been much different without my dad; I
dedicate this song to him:

More recently, always wanting to hear myself, I found this site which allowed me, and others to hear what this senior citizen sounds like. I hope you enjoy the songs that have become so familiar to so many. If you do, that will be my reward. Thank you for taking the time to read this lengthy profile.